Growing up, I was exposed to all of the elements of the Latin culture I was born into, except for what seems like the most important one: language. The music, food, dances, values and traditions were all a part of my day-to-day experience, but the Spanish language was as foreign to me as my parents were to this country. I remember looking forward to my mother’s evening routine of coming home from work, cooking dinner, sipping wine, and watching telenovelas. I would sit in the kitchen with her and focus on the television screen in hopes that if I watched the shows long and hard enough, I just might be able to simulate an immersive experience and be able to fluently understand the words and speak to the words perfectly.

For context, I am a first generation, American-born Afro-Latina. I come from a family of Black, Spanish-speaking immigrants who’ve traveled to the United States, in search of opportunity and success. My mother was born and raised in Costa Rica and my father was born and raised in Panama. Both were raised speaking Spanish as their primary language and converted to English upon their settling in the United States as teenagers.

In retrospect, I dedicated a lot of my childhood to over-compensating for my lack of Spanish language training. I spent countless hours memorizing the lyrics to Selena songs and of course the script to the movie. I danced to Gloria Estefan and La India, and I flipped between Univision and Telemundo whenever I could. I would even sometimes let out a sincere “¡Aye Dios Mio!” in moments of frustration to drive my culture home. I suppose this was cool, but with Spanish not being the primary language spoken in my household, I was stuck, and quite often left feeling insecure about the authenticity of my heritage.

I experienced moments of extreme shame when attending family functions. It’s usually during these events when I realized just how Latino I couldn’t possibly be. It was expected that at some point during the function, an aunt or uncle would walk up to me or any ‘unsuspecting’ young person and ask the same annoying question – “Why don’t you speak Spanish?” They would then proceed to tell us that we need to hurry up and go learn Spanish, as if somehow it was as easy as adding 50 cents to a vending machine. To them, it never mattered that I was taking Spanish classes in school or that I had a good enough understanding of the language, but could only respond in English. If I wasn’t parading through the party sporting my shiny new Spanish words, I pretty much felt like a cultural failure.

I often wondered why my parents stood by and just watched as these interrogations took place. I mean if anyone had the answers it should have been them, right? If I was to speak Spanish fluently, it would be because of their rearing, right? Yet instead, I was the only one on trial and therefore I was the one who was sentenced to a guaranteed 30 minutes of public shame, and unsolicited salsa lessons – usually by that one aunt or uncle who was going to show me how things in this family are really done. 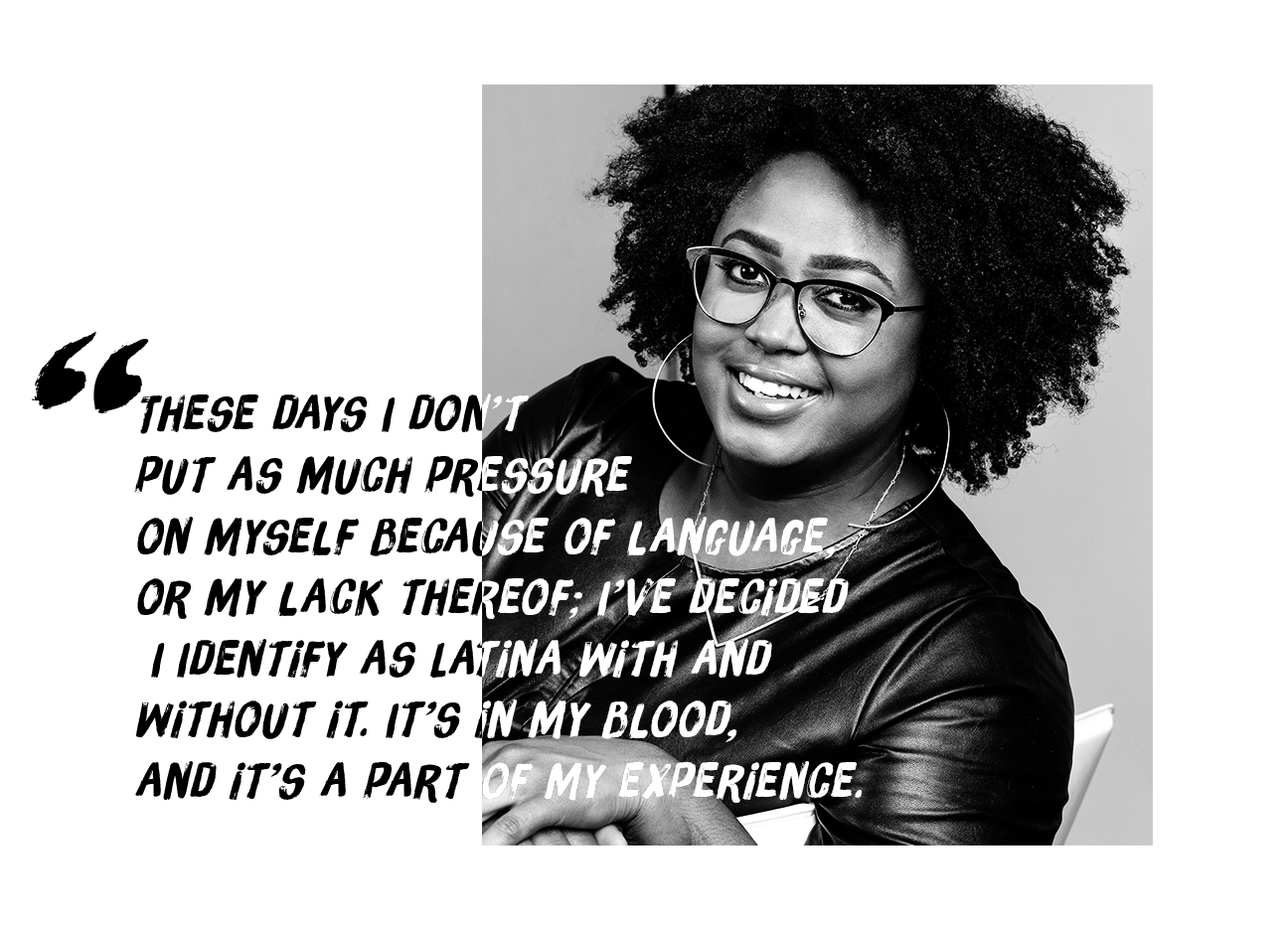 As I entered my 20s, I made it my business to purposely travel to places where I was forced to speak Spanish. Subconsciously, I had plans to make my family proud, and I will say, I’ve been relatively successful thus far. Realistically I probably only have about 500 words in my Spanish vocabulary. However, I do recognize that I’ve become proficient enough to ensure I’m able to find food, a bathroom, safety, THE BAR, and decent conversation with a taxi driver for trips longer than 30 minutes but less than 90. I acknowledge that it has been the combination of ambition, fear of dishonoring my family name, Google Translate, Duolingo, and random episodes of “Luz Clarita,” as a child, that have helped me learn a basic level of conversational Spanish. However, upon reaching this level, I’ve come to recognize that there is deeper context to the complex relationship with my experience with Latin culture and language.

Much like the generations of immigrants before them, my family came to this country and worked hard, in hopes to acquire a small piece of the American Dream, which promises picket fences, large plots of land, happy and successful children and a legacy that could potentially rival that of the Rockefellers, within several generations. To their credit they’ve been rather successful so far. My generation and I do pretty well for ourselves financially, we’re well traveled, and most of us are college educated. To my detriment, their aspirations to the American Dream, forced a disconnect to my Latin experience.

My aunt tells a story of coming to the United States, already having decided that she would identify as African American upon stepping foot on U.S. soil. Opting to raise her children in a predominantly Black Baptist church, so they could identify with the people who resembled them the most in this country. My uncle arrived on U.S. soil at the age of 7 speaking only Spanish, but by his teenage years English was his primary language and he had admittedly forgotten most of his native language. He shared his story of hiding his Costa Rican heritage in an effort to avoid his language skills being tested. The story that hurt the most to hear was from my mother. When asking her why she hadn’t spoken Spanish to my brother and I while growing up, I could hear the dread in her voice as she delivered her truth, “I stopped speaking Spanish to you because I didn’t want you to be made fun of the way I was when I came to this country, for sounding different.” It’s hard to hear my mother acknowledge that stifling her culture, was her form of protection for herself, and for me. More explicitly, it hurts to do so.

It’s ironic to me that in this same country that rewards its native citizens, who learn additional languages, with higher salaries in many industries, and access to exclusive institutions in academia; there is a population of people who have immigrated to this country and have purposely opted to shed the language of their mother country. All in an effort to seamlessly assimilate into American culture. These days I don’t put as much pressure on myself because of language, or my lack thereof; I’ve decided I Identify as Latina with and without it. It’s in my blood, and it’s a part of my experience. The goal is to get better, so I lean into what I do know, look up what I don’t, and embrace my journey to this point.

Kai Deveraux Lawson, uses her life long passion for culture, and 8 years of experience in advertising, to tell honest stories that shed light on the need for Diversity & Inclusion in the workplace. Her experience led her to launch the culturally focused platforms, Mixed Company Podcast and her blog, Mylifeofkai.com. On these platforms, she shares her first hand experiences in life, travel and career, from the perspective of a millennial woman of color.